Long, long ago I posted that I was intending to build a binding jig along the lines of Stew Mac's. Loved the idea, was repulsed by the price. I sat in my corner and thought and looked and pondered some more. Spent time on ebay shopping for things and bits. This is the fruit of my labor.

I used the Ridgid because the Colt is being used for my rosette jig and I'm basically lazy. I didn't want to deal with moving from one to the other so I bought two trimmers. Both are soft start and variable speeds. Don't know which I like better, but I had the Colt first and a need for a rosette jig first. That's were it will stay unless the Ridgid is worthless. 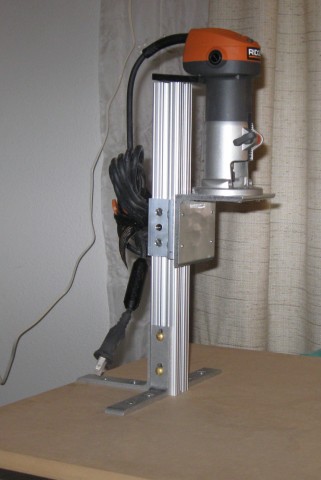 The plate with a bolt through it is the stop. It drops into a hole in the center of the extruded channel. I left it removable so that I wouldn't have to hassle with it when I needed to dismantle it to put it away. The bolt is long enough that it isn't going to pop off in use. 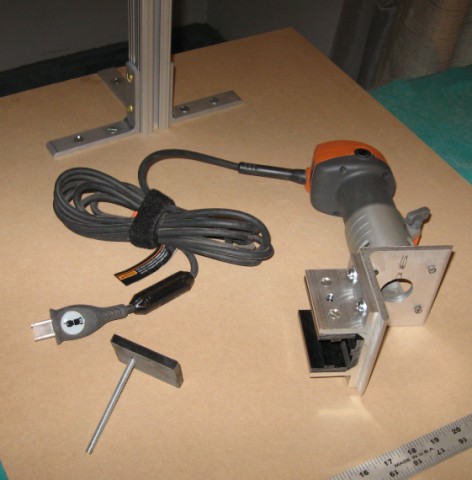 The entire setup consists of a piece of 1.5" extruded channel, a linear bearing and a piece of the largest aluminum angle I could get reasonably and three pieces of angle to bolt it to the base. The three pieces came from the same seller as the extruded channel and were predrilled as well as the linear bearing. I had cut and tap the plastic bearing pieces, but that was all. $55 for a completed bearing. $16 for the bits to put together. I used cross dowel bolts for the three base pieces to screw into because they fit in the channel and I had them on hand. The only tapping I had to do was the three plastic bearings and the four holes in the angle that the bearing bolts to. Not much too it really. 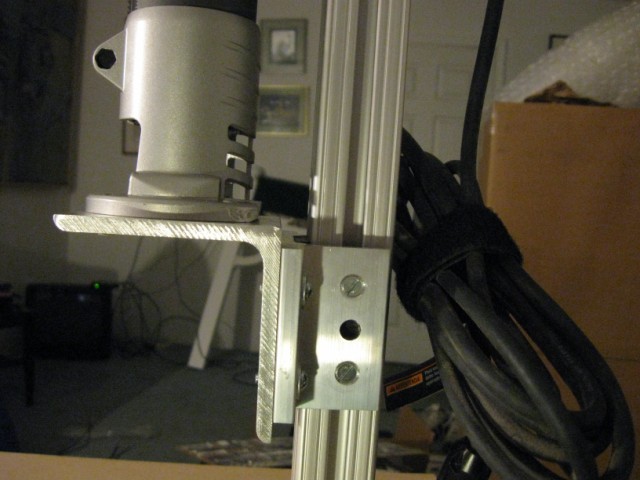 I've ordered a tapered doughnut from John Hall because I'm jammed up at the moment and don't want to fuss with getting the correct angle on it. That should be here by Wednesday. And that will finish the jig itself off, leaving the cradle to do, which I've started, but that's going to be another few weekends down the road before I can finish it.

We are leaving at the end of the month to go to Denver for a week and pick up our youngest Ryan and bring him home. Lots to get done before then so... no more shop time until May. If I stay on this schedule I should have the guitar finished by the end of summer. Fingers crossed and the creek don't rise too much more.
Top

Lillian wrote: I'm jammed up at the moment


Have you tried some bran in the mornings?

Sorry, couldn't help myself.
Nice job on the jig :serg . You are right about the stewmac though, it's a nice piece of kit but god awfull expensive. This looks like an admirable facsimile & well up to the task. Makes my quick knockup look silly now.
"Jesus Loves You."
Nice to hear in church but not in a Mexican prison.
Top

Brilliant Lillian, I feel my binding router [some 8 years old now] is a bit overbuilt after looking at yours, well done, its clean and uncluttered.
Taff
Top

Thanks, but the brilliance is Stew Mac's doing. I liked what I saw and thought it would be easier to borrow from them then the Williams jig.

I like the linear bearings over the things that Stew Mac uses because there isn't any slop and you can tighten them down a bit to control the sliding ease.

I'm looking forward to your creation Taffy. I know it will be brilliant. I'm just plagiarizing.
Last edited by Lillian on Thu Apr 16, 2009 8:45 am, edited 1 time in total.
Top

Well plagiarised Lillian. I'm the same, I get much more satisfaction out of making it than buying it. After adapting the K-sled to my needs I just love to use it, even though making linings is a bit boring I really like getting the jig out and its so much faster than the way I used to do it.

Just thought I should mention that you can get a leave in conditioner that will help with your hair, control the frizz a little dear
Top

Toejam wrote:
Just thought I should mention that you can get a leave in conditioner that will help with your hair, control the frizz a little dear

Lillian wrote: I'm jammed up at the moment


Have you tried some bran in the mornings?

Sorry, couldn't help myself.
Nice job on the jig :serg . You are right about the stewmac though, it's a nice piece of kit but god awfull expensive. This looks like an admirable facsimile & well up to the task. Makes my quick knockup look silly now.

Irish Oatmeal Nick. Throw some apple bits into and leave all your troubles behind.

Thank you, but it still has to prove itself. If it works, then I'll beam.
Top

Toejam wrote:
Just thought I should mention that you can get a leave in conditioner that will help with your hair, control the frizz a little dear

Jim, its all the rain up here. It makes it impossible to control the mane. And Martin is right, after all those acid treatments trying to remove the wart, well, my hair has really paid the price. I think its beyond repair.
Top

Fantastic Jig Lillian and beautifully made . Looks good and sturdy .I'm enjoying your array of avatars too !

Craig wrote:I'm enjoying your array of avatars too !

"Jesus Loves You."
Nice to hear in church but not in a Mexican prison.
Top

Looks great, Lillian. Would you mind divulging the seller?

Pat, I bought most of it off of an eBay seller8020 Inc Garage Sale.
I bought a piece of 15 series extrusion, 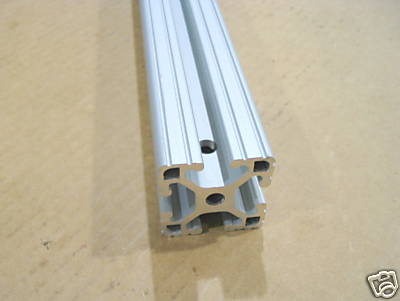 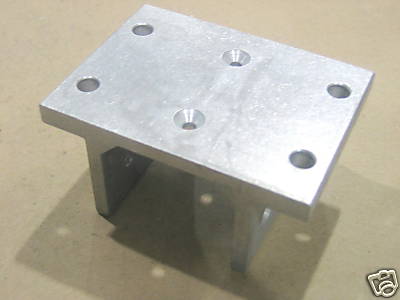 a piece ofT Slot UHMW UniBearing your choice of black or white, and 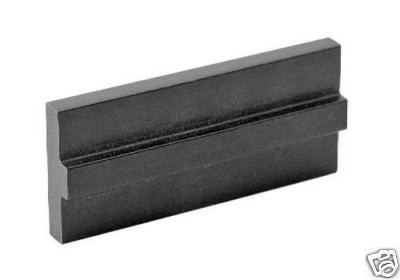 bearing pad screws and If you don't want to futz with it, they have complete bearings for about $45.


I also picked up three pieces of floor to panel mounts. They are just 1.5" wide 5"x2" predrilled angle supports. I can't find them on their site at the moment. But they look like this minus the base plate. 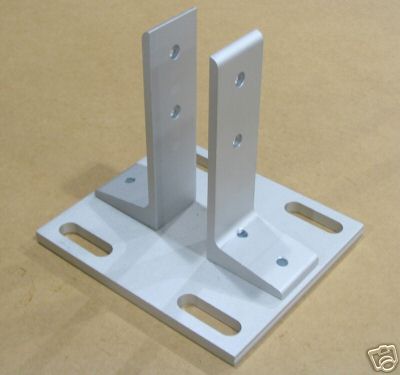 I did not order any of the connecting bolts. I used 1/4 20 dowel bolts and 1/4 20 machine screws to hold the extrusion to the angle plates.

The base plate is a piece of aluminum angle I got from Metals Online. I had them cut it to length. They are here in Seattle so I could just pick it up and save on the shipping.
Top

You are most welcome Pat. If you order it all at once, you'll save about $20 in shipping.