A place where you can let us see your finished instruments in all their glory.

This ones being in progress for a lot longer than I had anticipated, but then there were a lot of parts of building this one that just take heaps of time, and there is no point in rushing through them.

The adjustable neck has turned out a treat. Heaps more adjustment than I anticipated using the T-nut. I can have the strings resting on the frets, and raise them up to being able to play slide. Much more than will ever be required. And really easy to adjust. I also put the adjusting end for the truss rod up in the headstock for the ease of adjustment factor as well. Plus it was just to much of a headache trying to get one to work out with an adjustable neck through the sound hole. 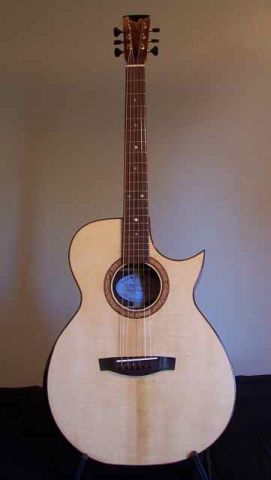 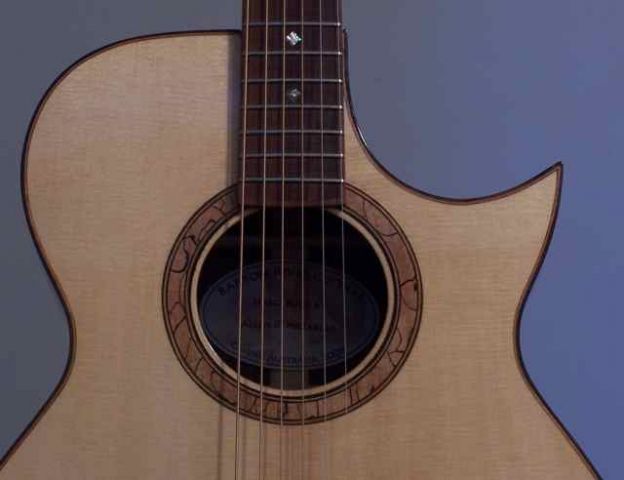 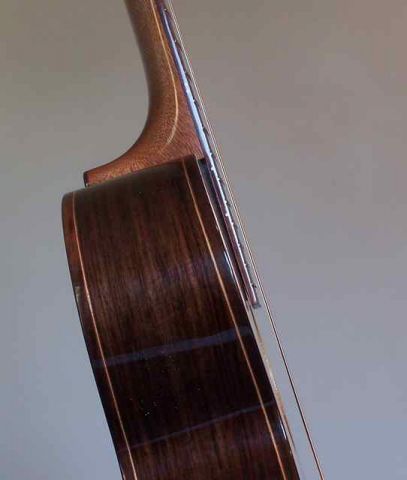 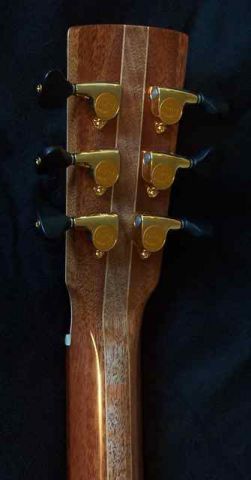 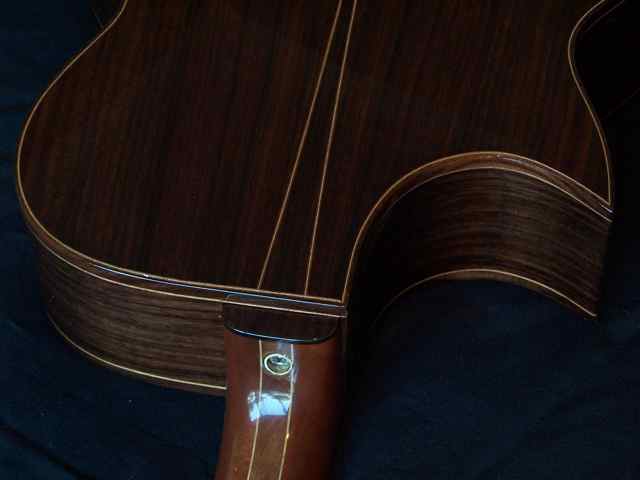 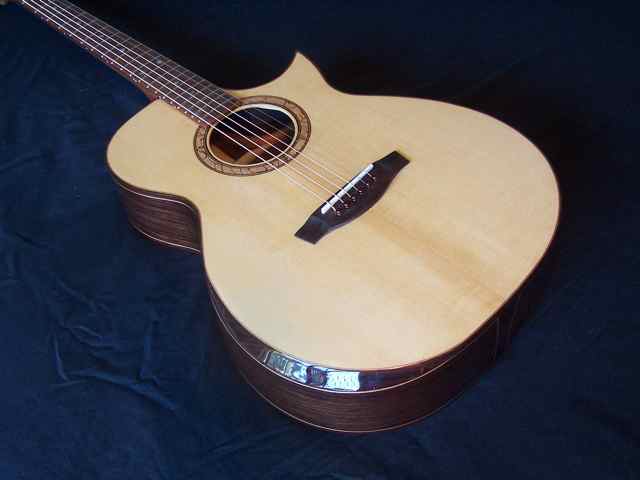 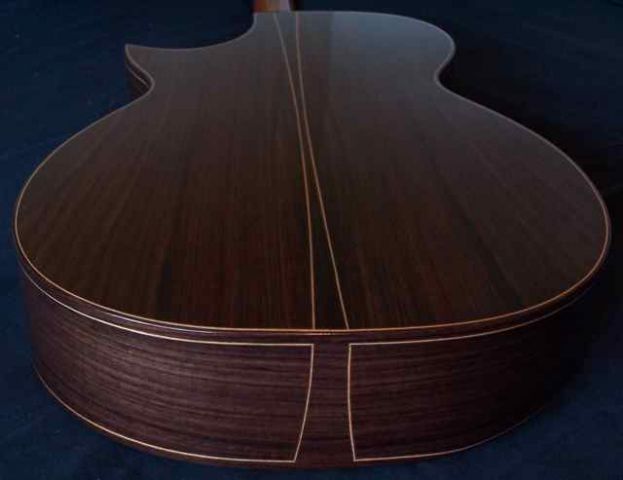 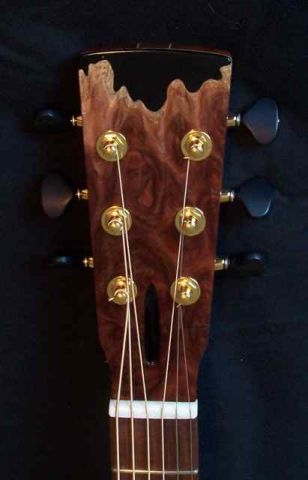 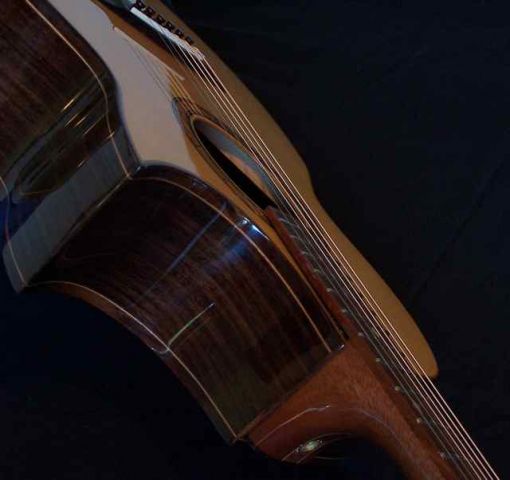 This is without doubt one of the classiest guitars I have ever seen. It looks like some modern art-deco classic. The lines and rich colour blends are just perfect, truly artistic work and the shaping of fine lines of the bindings just pull everything together so well. This is magazine centre fold stuff my friend and you are going forward as a builder in leaps and bounds.

Its a cracker Allen....its got a really refined look about it. The headstock looks really cool.

Yep Allen, what a "Bobby Dazzler". As Kim said, the rich colour is what appeals to me along with the head plate decal.

I don't think that Allen's headstock has a decal, but I could be wrong, and most probably am. But after a few beers, I am hfdvwbfv3nMNmqinfuBJW`91UI WHOOPS...but I have been thinking that to achieve that fantastic headplate, our mate Allen, being a spray painter and all, may have taken a dried paint spill from his day job workshop and traced the 'liquid' edge onto that gorgeous burl veneer that Tim sent him.

After carefully cutting to the line of that tracing, that cut and cleaned edge was then traced onto a nice piece of black ebony. The two veneers where then thicknessed and jointed into place on the headstock and after trimming back the outer edge of the veneers to the headstock shape with a flush trim, ebony dust and epoxy was used to marry the burl and ebony pieces together so perfectly.

But then again knowing the cleverness that Allen has displayed from his past work, I am certain he came up with a much more simple process.

So comonnnnn Al! Spill the beanz in a tute M8.

wow, thats really something...theres a lot to love about this guitar..excellent work Allen.

I really like that backstrip and wedge every time I look at it.
Top

I really like this one.
Great job Allen.
Dave Anderson
Port Richey,Florida
Top

Wot they all said, simply beautiful. I suppose it sounds alright to....
make mine fifths........
Top

Allen, there's a lot to love about this guitar! The headstock is one of the most beautiful and innovative I've ever seen, and I just love the thin, curved back strips and tail graft. Awesome work!

Exactly what did you end up doing for your neck adjustment hardware & engineering?

Thanks one and all. After attempting to build a very traditional look in the Size 5, I wanted to go to a much more modern look without being over the top with "bling".

As for the head plate, it's a thin slice of a burl slab that Tim sent me. Unfortunately it wasn't deep enough to cover the entire head stock so there is a bookmatch flip of it length wise around the middle of the truss rod adjusting slot. I did a scarf joint there hoping that the extra gluing surface, while still very thin would help hide the join.

The black at the top is actually much easier than trying to get a matching piece of ebony to fit. I glued on the burl veneer, then once dry I propped up the neck so the head plate was nice and level. I took some Stew Mac brown binding tape and used it to make a dam around the end of the headstock. Then made up some WEST Systems epoxy with a few drops of Stew Mac's ColorTone black stain concentrate, and poured it in to fill the void. Let cure then level.

The neck adjust is pretty simple too. I took a bit of advice from Rick Turners comments after some observations of the way I built the one on the Size 5 that I felt could be improved. The Carbon Fiber rods are imbeded into the fret board as well as the neck, so there's no need for a hole cut in the top. I used some grub screws for yaw adjustment, and 1 upper bolt into a barrel nut in the neck. The lower adjuster in embedded in the neck using Craig's idea of the bronze bushing to house a stainless steel cap head screw into a T-nut in the neck block. I didn't line up the yaw adjustment with the upper bolt, which I will be sure to do next time.

The fret board sits up from the top perhaps a couple of millimeters. This is important to have in order to allow free movement of the neck for adjustment. 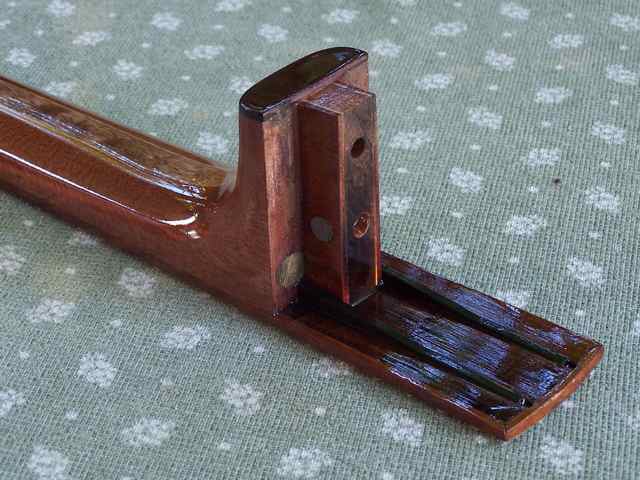 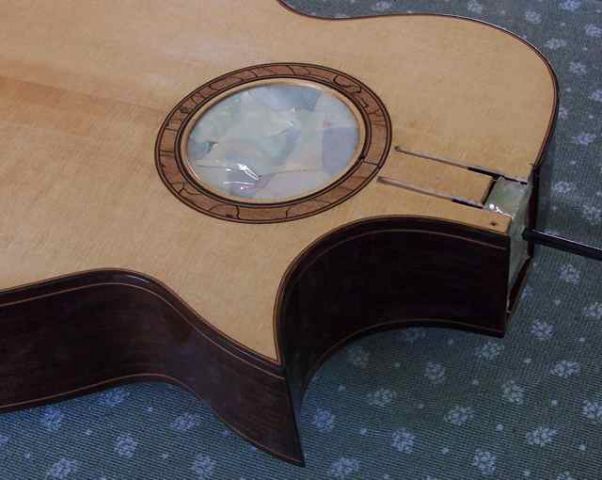 Hey Allen
Such great work, as good as any I've seen. I was impressed from the first photo and it kept getting better. I used to check out other makers around the world on the net and put their works on CD for inspiration, this guitar fits right in there. I don't have go looking for good guitars any more, they come to methrough the forum . I'm very impressed.
Allen was this for a customer?
Taff
Top

This is a great looking guitar Allen . The cutaway, headstock and your purfling lines all add to it's beauty.

I'm pleased to see the adjustable neck work out, and thanks for the acknowledgement, I appreciate it . Did you capture the screw ?

Allen, I commented on the OLF but I'll say it here too because it deserves it:
That is beautiful. I really love the backstrip.
Mike Snider
Top

Thanks Taffy and Mike. No this guitar was just built on a whim, like all of them so far. It's looking for a home, and hopefully someone with some spare cash will appreciate it enough.

Craig, the nut isn't captured. It's string tension that pulls it up, but with the upper bolt being snugged up, not zinging tight, there isn't a great deal of neck flop when the strings are off. It's still a work in progress, but it's very functional as is. A few more refinements and I think I'll be set.

It's a bit of work to build with the adjustable neck, but getting a neck set is just a pleasure now.

Wow, the detail on that baby is amazing!! Some kind of fine craftsmanship. I really, really love that peghead. Wow!

I agree with Bob - this is one of the finest guitars that I have seen too.

The cut-away is very sexy and you have really done a great job of exploiting the materials to bring out their natural beauty.

Often guitars look to me as if the builder has heaped every conceivable feature and wood into one guitar and the result is not unlike a person who got dressed in the dark.......

But this one has everything contributing to the whole image and is certainly IMHO far greater than the sum of it's parts.

Over the top cool Allen!


How do you do your fingerboard slots for the CF rods? Do you do it on the table saw while the blank is square or have you got a jig?
I am thinking through this process at the moment and I love jigs.
Cheers
Dom
You can bomb the world to pieces,
but you can't bomb the world to peace!
Top

Dominic, the slots were done on my home made router table. Neck blank and fret board blank were square. I've been thinking through a better way to do it, as putting the taper on and keeping everything lined up is a pain.
Allen R. McFarlen
https://www.brguitars.com
Facebook
Cairns, Australia
Top

One very fine looking guitar Allen, you have a great eye for detail. Tail graft and back are particularly nice. EIR is still a very under appreciated wood. Mind you I think you could poke an eye out with the cutaway!

Now you know me where's the soundfile?

Allen
What a great piece of functional art. Everything about it oozes class.
Top

(That's Canadian for, I love it! and You suck Allen

)
"I wish one of the voices in your head would tell you to shut the hell up." - Warren De Montegue
Top
Post Reply
29 posts

Return to “The Gallery”

Users browsing this forum: No registered users and 7 guests