Got a new way of doing something? Or maybe an old method that needs some clarification.

Back in August 2008 the thread at the following link discussed how to clean gummed up abrasive belts from a drum sander:

Taffy showed his method of bending the gummed up belt over a tight radius while dry which makes the worst of it peel off: 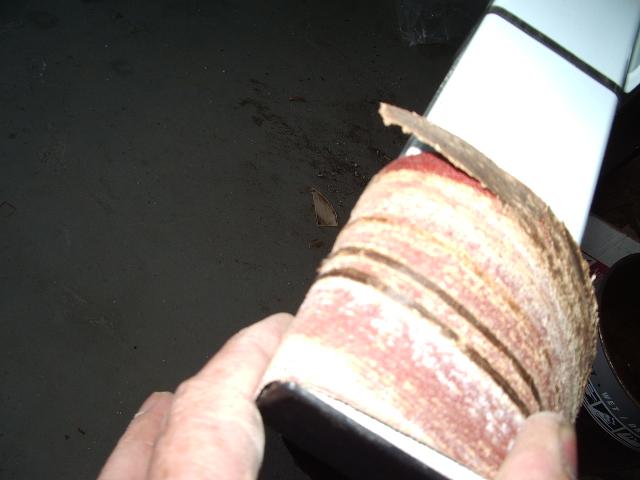 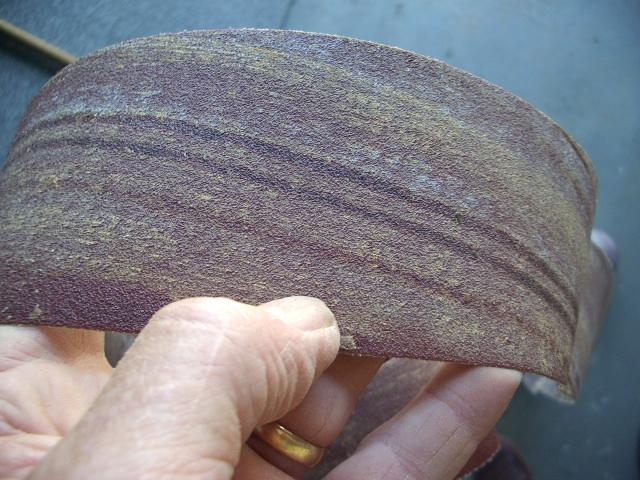 And after a pass with abrasive cleaner, the belt is ready to go again. 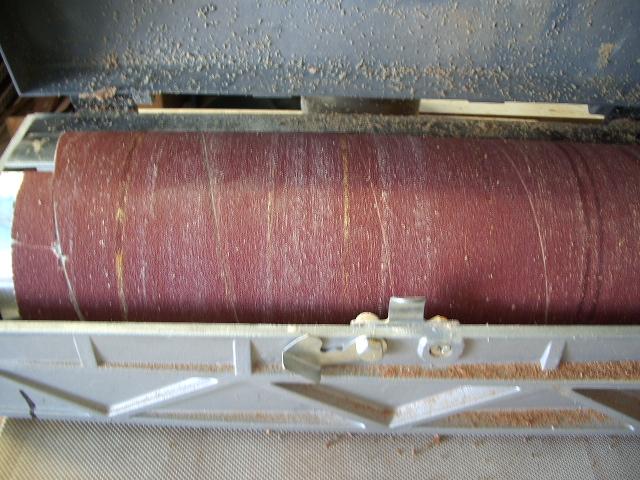 Its a great way to maintain a belt in service and avoid burning.


I then showed some before and after images of the results of the soaking method. If you have a few belts this works great because you simply soak them in a bucket of mild soapy water for 48hrs and then blast the gunk off with a pressure washer. 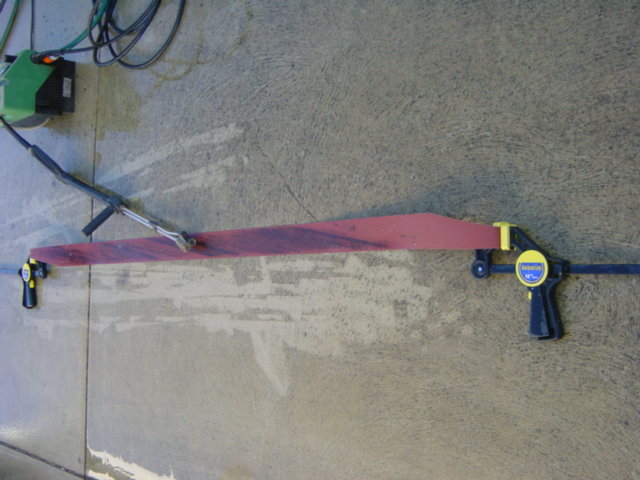 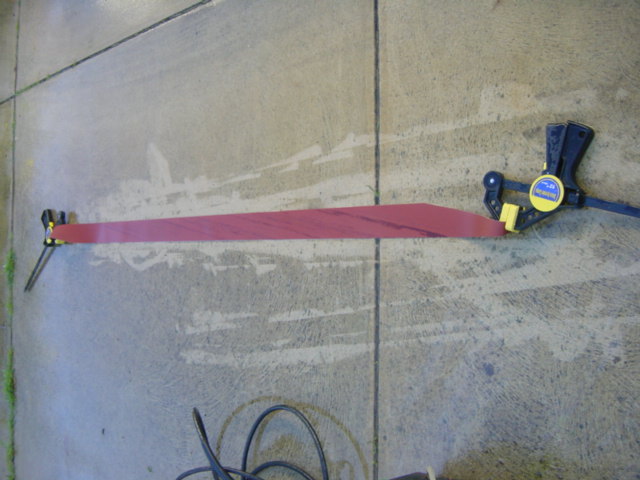 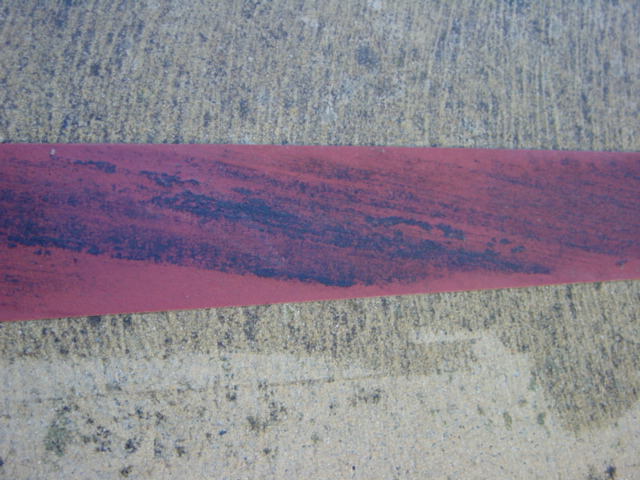 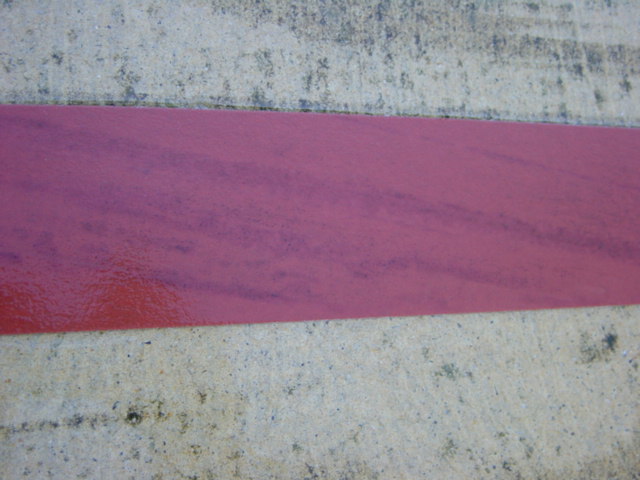 Well today the Gerni was retired on sick leave..the smell of burning oil is never a good thing, so I was forced to clean the remainder of a bucket of belts by hand!!!

As you will see some of the belts were 'really' badly gummed, one in particular which was the result of recent reno work and involving painted jarrah skirting. The green belt in the following image had already been cleaned via the soak and blast method a number of times in the past and had become quite gummed once again and was awaiting a soak when I had put it back on the machine to grind off some thick old enamel paint on skirting and architrave.. yeah, yeah, I know, I know....

In fact things were gummed up so bad that during the clean up operation the nylon brush was not being as effective as I had hoped even after a 48hr soak. So there I was giving the crook Gerni a dirty look when I came up with an idea for yet another tool that would make the job go easier..a brass wire brush. I guess any wire brush would work as well but the wires on my old brass job had become bent over from abuse and I was hoping that using it to clean the abrasive belts would grind off the bent bits and renew the brush...and as you will see in the last image, to a point, it worked

So here we have some more before and afters so you can judge for yourselves how well the method works, even without a pressure washer. Its a bit of mucking about I suppose but it saves a shitload of $ on sanding belts

Straight from the bucket after a 48hr soak with the nylon brush at the ready:

After a scrub with a nylon brush and the brass wire brush ready to go:

After a scrub with the brass wire brush its good to go. Quick and easy, now just hang with the washing for an hour and it can go back on the machine.:

Here's some before and afters of an 80 grit Klingspore, same brand of belt that supplied with the Jet sanders when new. This one has burnt on either particular oily Cocobolo, or the king of waxy woods, Bocote..

Again, quick and easy and ready to go back on the machine instead of the bin..

I use a wire brush quite often to clean up gummed sanding rolls.

Don't even take the sandpaper of the drum. Just attack it with a wire file brush.

Thanks Kim - great tute and very practical solution.
I've had dramas in the past with WA Sheoak leaving black chunky streaks on belts (and black burning marks on subsequent boards put through) and till now have 'picked' these bits of cr*p off with the end of a small old screwdriver ... tedious.
John M
Top

Yes John, WA Sheoak is another species of wood that must be sanded with 'very' light passes. But if you do happen to get some burning on the belt, this method will sort it.

A wire brush, screw driver, old chisel etc will all work to a degree, but soaking is the only thing that will make most anything fall right off, and because the gunk comes off so easy, minimal damage is done to the abrasive in the process.

I keep a dry 20lt bucket in the shed into which used belts go as they come off the machine. When there's 6 of them in there they get covered with water and a dash of any detergent available is added to act as a surfactant to assist water to get into the crud so it will expand and lift off of the surface of the belt...If you look closely at some of the images above, particularly the third last, you can see that is precisely what has happened.

Some people freakout thinking that doing this will somehow affect the belt. But its not sand'paper' we are working with here. The backing on all of these drum sander belts is a poly of some kind or other and the abrasive is always bonded with a resin of some kind...none of these things, including the abrasive grit itself, will be adversely affected by water. So there is no danger whatsoever of buggering the belt even if you were to soak them for six months...but I must warn anyone who tries this against just leaving them soak for days on end without changing out the water....after just a few days, the water is going to STINK!! and it will do so far more than you could imagine a bit of saw dust could..DAMHIKT

Kim wrote:Yes John, WA Sheoak is another species of wood that must be sanded with 'very' light passes.

Sanding belt providers will hate you!

John, from memory, to avoid burning the belt WA Sheoak is best run through the machine at moderate speeds with nothing finer than 80 grit on the drum. Once you have it where it needs to be, finish by hand or with an ROS. It pays to keep a close eye on the wood after each pass, particularly after adjusting the drum down as it often starts to blush up or redden in patches like a peach if your pushing things along too hard. If you ignore this at the early stage, it can permanently darken the colour of the set and reduce contrast deeper into the wood to the point that no amount of hand sanding will remove the colour change completely.

In general I have found woods prone to burning in the drum sander, or those that simply clog the belt very easily, such as native olive, and bocote etc, are best deal with by a Wagner Safe-T-Planer at the drill press first to get them close to thickness. Once at the drum its a simple matter of a few light passes at a feed speed between 50 to 70 on a Jet machine, with nothing finer than 80 grit fitted to the drum. Finish off to finer grits by hand or ROS and that will save a good deal of grief.

Kim wrote:... it often starts to blush up or redden in patches like a peach if your pushing things along too hard ... it can permanently darken the colour of the set and reduce contrast deeper into the wood to the point that no amount of hand sanding will remove the colour change completely.

Yep, that's exactly what happened; a real pain-in-the-butt to sand out by hand

Do you know of any particular brand of belts being more suited over others for processing oily woods like Sheoak? I see from pics above that you use variously coloured belts. Ta mate.
John M
Top

John Maddison wrote: Do you know of any particular brand of belts being more suited over others for processing oily woods like Sheoak? I see from pics above that you use variously coloured belts. Ta mate.

When brand new, I don't think any brand of abrasive in a specific grit is going to perform much better than the next. The big difference between brands is how long that specific grit will continue to cut efficiently at that grading 'and', for our application, how many times you can clean and reuse a belt before the backing fatigues and peels the edges or simply breaks. In that the general rule applies where the more you pay, the more wear you will get in the long run, cheap abrasives are a false economy and buy you more frustration than they are worth.

Klingspore is a good quality abrasive and so to is most 3M stuff. But these days, it always come back to the backing material. For example the green belt in the above images is a 3M product called "cubicut polycut". The abrasive is alumina zirconia that has been resin bonded to a water resistant "YF" weight polyester cloth backing...The product is designed for working stainless steel so its really durable. Klingspore abrasives, and 3M for that matter which are designed specificaly for wood will cut a bit quicker, but they will not cut as rated for as long.

Bottom line is that all abrasives are a consumable, they wear out, and you throw them away. But some will perform a particular aspect of their task better than others, but to achieve this, there must be a trade off of some kind. As mentioned, the 3M cubicut product is not as efficient when working wood as a wood specific abrasives are and the backing is quite stiff when new so its a bit of a fiddle to fit to the machine. But on the plus side, the backing soon relaxes with a bit of use to snug up really well on the drum and the clincher, because of the stiff backing, the cubicut product can be cleaned again and again so that makes it a worth while proposition.

The one thing to keep an eye on with any heavy back abrasive belt is they are naturally more prone to fray along the cut edge. Obviously if left unattended this fraying prevent the edges from snugging up properly which in tern will cause the belt to move on the drum...you don't want that. The solution is to simply run a gas touch (a cheap creme brulee burner is ideal for this) along the cut edge immediately after you first cut the belt, and again after cleaning just to touch up any loose ends you may see.

Kimbo wrote: The backing on all of these drum sander belts is a poly of some kind or other and the abrasive is always bonded with a resin of some kind...none of these things,

The backing paper is fishpaper....like we use for binding. It's a vulcanized paper! Like gasket material. Great tut Kim!
Top
Post Reply
10 posts • Page 1 of 1

Users browsing this forum: No registered users and 2 guests