Instrument plans that are available on the internet free of charge. Please add any that you find here.

Every time an outstandingly good charango passes over my bench I take some detailed measurements and make a set of pencil drawings. Seven such drawings have been piling up within the last few years, and now I finally made an effort to convert one of them into an ink drawing which I find is a necessity for a decent scan. The next step would be to convert it into a CAD drawing, but I think I am too lazy to do that!

I made this first ink drawing of a charango made of an armadillo (quirquincho or khirkinchu in indigenous Quechua language of the Andes). I have not come across to more than three or maybe four very well sounding armadillo charangos, which has nothing to do with the material used but rather with craftsmanship. As such well sounding armadillo charangos are that seldom, thus remarkable, it was easy to choose which charango drawings to convert into ink drawings first. Of course, the meaning is not to hunt down an armadillo which suits these charango plans, but with the data provided it should be possible to make a wooden charango of the same specs. The armadillo shell was around 2.5 mm thick, a wooden bowl should be between 6.0 mm and 2.0 mm thin, depending on the type of wood used, near the neck the bowl should be between 8 - 12 mm thick, also depending on the wood species. However, I won't go here into the details of carving the bowl.

The top of this charango was somewhat special, as it has no struts at all, just two harmonic bars, one below the soundhole, and another transverse bar beneath the fingerboard. At a general top thickness of about 2 to 2.5 mm And a lower bout width of 200 mm it still surprised me that the to did not show a single sign of giving in, although I have to say that the top is heavily domed (the center of the top is 3 mm higher than the lower bout borders, which translates into a 1670 mm radius! at the moment the plan is insofar incomplete as it does not clearly reflect the top doming. Maybe I'll update the plan further down the track.

The top is held on the shell via 13 irregularly spaced triangular consoles inside the body, and outside with the for this kind of charango typical, here relatively sparingly applied glue and wood dust mixture.

The drawings include two sheets containing a set of cross section outlines I drew with this apparatus:

The repair story of this charango is a saga on its own, maybe I'll open a separate thread about it once I'll have recovered all the photos I took during the process. Although the owner believes to remember that this instrument was brought to Switherland about 40 years ago, I suppose that this charango was built around 1990. One strong hint it may not be older is that the fingerboard and many other parts seemed to be glued on with foamy polyurethane glue (and yes, part of the repair was replacing the fingerboard!).

Click on the following picture of the plan to download the whole set of drawings plus some additional photos of the rosette, bridge, top doming and other details (zip file, ca. 1.3 MB) 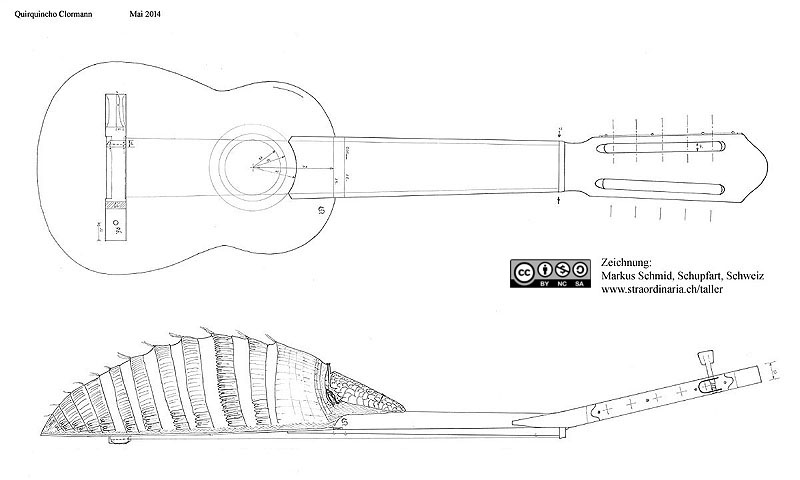 Where do I source an Armadillo of the same or similar cross section?

"Jesus Loves You."
Nice to hear in church but not in a Mexican prison.
Top

Yep, the best materials don't help poor craftsmanship Markus and love the Armadillo in profile. Well done Markus. Never heard or seen one here in Aust yet you come across them in Swiss, any idea what gives?

I absolutely love this song, Bob! It should be the hymn of all armadillo charango players!

Nick wrote:Where do I source an Armadillo of the same or similar cross section?

Well, those you can find on the street mentioned in the song Bob posted, generally have a cross section that is too large!

On the first charango I drew a plan of I used this tool... 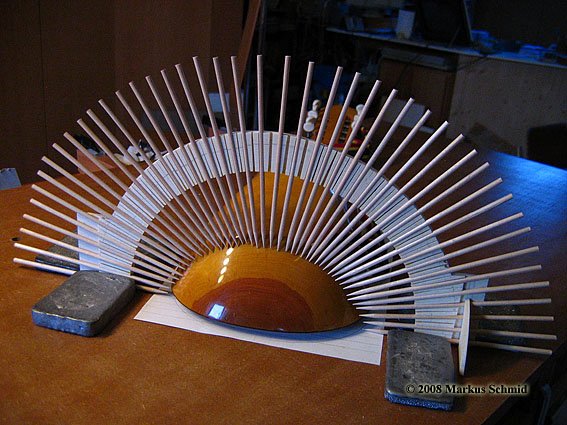 ... which I had made using the idea of Stephen Barber and Sandy Harris (http://www.lutesandguitars.co.uk/ , picture of their apparatus halfway down the page). But its use was too tedious and slow for my taste, so I came up with something new which gets the job done in a fraction of the time required by the Barber-Harris tool and, as a bonus my own tool is not patented, so I could produce and sell it!

Kamusur wrote:Yep, the best materials don't help poor craftsmanship Markus and love the Armadillo in profile. Well done Markus. Never heard or seen one here in Aust yet you come across them in Swiss, any idea what gives?

Steve, I would go one step further saying that even with poor materials it is possible to make a good musical instrument. To be true, an armadillo shell is just what it is: a dead animal with all its disadvantages: ready to stink and rot and attracting all kind of bugs, and I find it not at all a pleasure to work with this kind of material! Also, as the animal's shell is held together by tendons it is not at all a stable material as soon as RH goes up above 60%. I really can not recommend the use of armadillo shells to make charangos! I own several armadillo charangos, all bought from Bolivian, Peruvian and Chilean owners who brought them to Switzerland 20 and more years ago. Nowadays many of the South American armadillos are protected species, but in the USA there are plenty of other, not endangered armadillo species, mainly in Texas I believe (Steve Kinnaird may know more about it).

The idea of the plan is really the one of being some help to reproduce the shape of the bowl yielded by forcing an armadillo shell into a guitar-like shape: 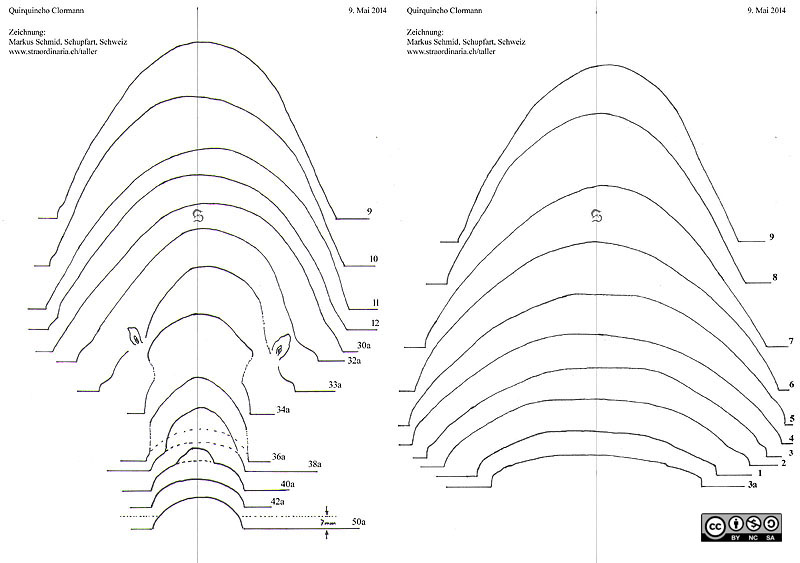 Although, there is a tendency amongst charango builders to go away from this shape, making the lower bout part considerably deeper (similarly to what I did on my first charango I built) in order to lower the lowest air resonance frequency and make them sound less strident.

Spectrograms of this charango with opened and closed soundhole:

To be stupid is like to be dead. Oneself will not be aware of it.
It's only the others who suffer.
Top
Post Reply
6 posts • Page 1 of 1

Users browsing this forum: No registered users and 3 guests